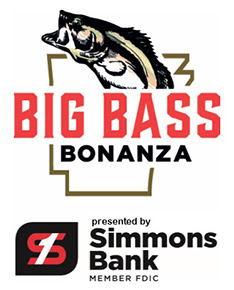 Despite a nasty cold front, big bass blanketed the board on Day One

Leaders each of the five pools are:

Three anglers from pools in Dumas, Fort Smith and Lake Dardanelle weighed in bass at over five pounds, and every pool has so far produced a fish surpassing the four pound mark.

The Willow Leaf Award of $1,000 will be presented to the parent/child or grandparent/grandchild pair weighing the biggest fish during the three days. The amount of hourly prizes will be determined by the number of participants for the three days and will not be announced until Sunday. Right now, Jesse Mosley leads the contest for the Willow Leaf Award with a 3.81 pound bass out of Dumas.

The Simmons Bank Big Bass Bonanza spans more than 300 miles of eligible fishing waters on the river inside the state’s borders.  The event is divided into five pools, and tournament action will resume at 6 a.m. Saturday morning with the final weigh-in being held Sunday at 1 p.m. Fishermen can still register at any weigh-in location Saturday and Sunday.  The grand prize and other cash awards will be presented during Sunday’s award event at the Rocky City Yacht Club, which will begin at 4 p.m. at 1726 East 2nd Street in Little Rock.

Simmons Bank is proudly sponsoring the tournament for the fourth consecutive year.